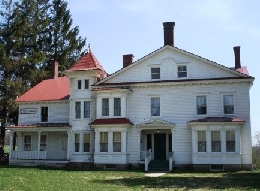 The Trustees’ Office was originally constructed in 1813 as a simple gable-roofed building facing the road.  In 1852, it was reconfigured to face west and enlarged to more than double its original size. The kitchen had a “sliding cupboard” or dumbwaiter similar to those in the Brick Dwelling.  Flooding from the nearby stream necessitated moving the kitchen in 1876 to a new structure which connected the Office to its nearby woodshed. The building was again enlarged in 1895 and “Victorianized,” including the addition of exterior porches on the front and side of the building and the addition of a three story tower.

“The World” met the Shakers in the Trustees’ Office and Store.  Here, visitors on business placed orders for goods and sightseers bought souvenirs in the Fancy Goods store.  Guests of the village dined and lodged here.

Business-minded Shaker Brothers and Sisters served their communal family in the role of Trustee.  They lived in this building and were responsible for business transactions, hiring personnel, and managing the communal family’s property and investments.

The Shakers used the Trustees’ Office and Store until 1959. The parlor was used for entertaining visitors as well as a place for the Shakers to play the organ or watch television.