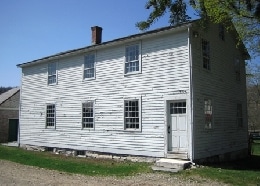 The Shakers utilized hired labor as early as 1826 when stone masons were brought in to build the Round Stone Barn.  As Shaker membership declined in the second half of the nineteenth century, especially in the Brethren’s order, farm workers were hired to keep lands in production and perform heavy labor.  Hired men were lodged in a separate building, convenient to the Trustee’s Office, where they received their daily work assignments and ate their meals.

A hired man working outside the 1910 Barn at Hancock Shaker Village.

Hired men worked for the Shakers doing a variety of jobs such as chopping wood, stacking hay, and digging underground aqueducts. A local man recalled his job with the Shakers during the summers of 1942-44 when he was between 10 and 12 years old. He and other boys were hired to work in the fields and in the round stone barn stacking hay. They made $2.50 a day and would report to the Trustees House at the end of the day and were paid by Hancock Trustee Frances Hall.

Originally a seed shop on the north side of Route 20, the current Hired Men’s Shop was moved to its present location in 1907 to replace an earlier building that had burned. The building was constructed before 1820 and was originally painted bright yellow. The built-in case of drawers in the south room of the second floor is among the oldest surviving examples on site, and retains its original green paint on the cupboard doors.