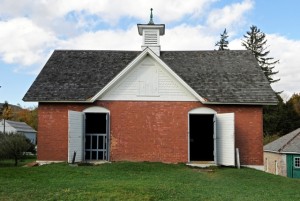 The preservation of food was extremely important for agricultural societies in the nineteenth century. Salt-curing, smoking meats, and processing fruits and vegetables into preserves and pickles were common methods of keeping food for the tough winter months. Ice also played an important role in the preparation and preservation of dairy products before modern refrigeration. The Hancock Shakers harvested ice from their reservoir and nearby Richmond Pond. This ice was sawed into blocks (called cakes), grappled with ice tongs, and hauled to a storage building on a sled pulled by oxen or draft horses.

The Second Family had an ice house as early as 1844. The Church Family built an ice house in 1866 that was located just east of the tannery. The extant brick ice house was completed by November, 1894, when Sister Emoretta Belden described it in The Manifesto: 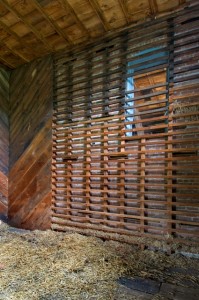 “We have long anticipated the possession of a new ice-house, with modern improvements.  Within the last two months it has been erected.  The building is 22×34 ft. with brick walls 18 ft. high, laid in red-colored mortar.  One half of the lower story is finished inside with Southern pine, to be used for cold storage.  The ice-hall and chamber will hold about two hundred tons of ice.  The outside wood-work is painted a light gray color, and presents quite a nice appearance.  There are rooms for vegetables, fruits, meats, and any things that we may wish to keep for a long or short time.”

By building the ice house into a hillside the Shakers took advantage of natural insulation provided by the earth. Cool air from the ice chambers vents directly into food storage rooms, and a cupola on the roof allows warm air to escape. The south facade of the building is small, to minimize the negative impact of the sun’s heat on the building, while the larger north side remains in shadow, and thus cooler on hot summer days. Also note the double and triple hung doors throughout the entire structure, and the triple-glazed windows on the lower level. The Shakers purposefully incorporated all of these architectural features to provide more efficient cooling capabilities and insulation.