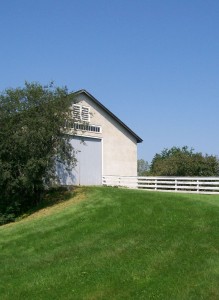 1910 Barn viewed from the South

The complex consists of three buildings: the barn, erected on foundations built in 1880 and a superstructure built in 1910; a dairy ell built in 1939; and an equipment shed that was reconstructed by the museum.

In 1879 the existing calf barn on this site was destroyed in a fire, and new one was built in 1880. A commodious, brick-vaulted root cellar, located under the south ramp leading to the hay mow, was incorporated into the new design.

On August 2nd, 1910 the barn was struck by lightning, and burned down. It was full of hay and wagons at the time, and the loss was estimated at $6000. Fortunately, the building was insured, and the Shakers contracted with the construction firm Osteyee Brothers for $8000 to build them a new barn. The stone foundations of the 1880 structure were repaired, and the upper stories were poured in concrete using wooden-board forms. Slate was chosen for roofing material, a choice commonly made for buildings at Hancock since the 1870s. The structure was then stuccoed over with cement and the date imprinted on the north end. All of the construction choices were made with the aim of lessening the possibility of a future fire.

In 1939 the wooden dairy ell was built by Pittsfield contractors following a plan prescribed by the Louden Farm Machinery Company of Fairfield, Iowa. It was used to house thirty Holstein cows. Today it serves as the museum’s Family Discovery Room. The equipment shed extending from the northwest corner of the barn was reconstructed by the museum based on the badly dilapidated original, which had to be demolished in the early 1960s. The granite watering trough just outside of the discovery room is from the Shirley, Massachusetts Shaker village, and was brought to Hancock in 1962.