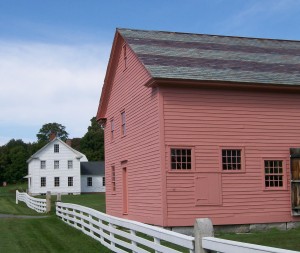 The Horse Barn originally stood on a nearby lot owned by the Shakers. It was dismantled and re-erected on this spot beginning on May 8th, 1850 by non-Shaker Matthew Criteden; and was completed by October of that year. An old wagon house (no longer extant) was moved across Route 20 to stand adjacent to it.

The barn became known as Elder Louis’ barn for Elder Louis Basting of the Church Family. Elder Louis kept teams of carriage horses in the barn, which was painted pink. The slate roof likely dates from 1876, when a number of buildings at the village were re-roofed in slate.

Note the large bay doors on the east and west sides. Unusual for New England barns of the time, these doors allowed for the Shaker brethren to enter with hay wagons, unload the hay into the loft above, and then exit without having to back out—important efficiency and safety considerations when working with teams of powerful, yet sometimes unpredictable draft horses and oxen.