More than three hundred members of Hancock’s six communal families met here on Sundays in good weather at the height of Shakerism in this area.  They worshiped privately in themornings but welcomed visitors to public afternoon meetings, always hoping to attract new converts.  Many famous people, including Charles Dickens and James Fenimore Cooper, observed and wrote about Shaker worship, which consisted of singing and dancing.  The sect’s name came from motions that early members made in spiritual ecstasy.  Men in rows on the east faced women in rows on the west.  Hymns were traditionally sung without instruments for the sake of simplicity.

The original Meetinghouse was begun in 1786, and subsequently enlarged with a gable roof.  The Ministry’s living quarters were on the second floor, and a large open space allowed for worship services on the first floor. Two doors on the front of the building served as separate entrances for Brothers and Sisters coming to meeting. No longer used, the building was razed in 1938. 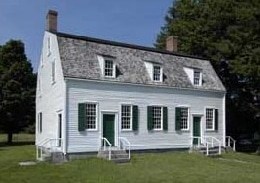 The present Meetinghouse was built by the Shirley, Massachusetts Shaker community in 1793, purchased and moved to Hancock in 1962.  It was built in 1792-3 by Moses Johnson, who built the Hancock Meetinghouse to a similar gambrel-roofed design.  Shaker religious laws stipulated that Meetinghouses “should be painted white without, and of a bluish shade within.”  Historic analysis has revealed seven layers of paint.  The 1793 Prussian blue paint color was replicated in 2005.

The building’s construction enabled the large open dance floor. Hanging platforms enabled the raising or lowering of candles. Note the absence of a cross, alter stained glass or other religious symbols. Built-in benches around the walls were for worldly visitors.