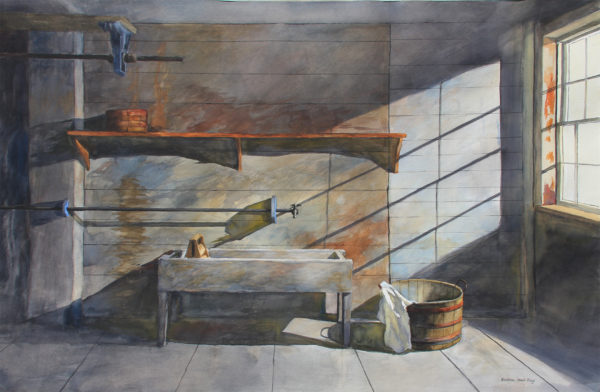 Artist Barbara Ernst Prey has an affinity for light — specifically, capturing the fleeting luminosity within built and natural environments. Borrowed Light presents a new body of watercolors depicting scenes from the Village. Taking its title from the Shaker principle of “borrowed light,” or the incorporation of windows and skylights into interior walls as a way to refract light from the outside in, Prey’s exhibition is inspired by visits across three seasons where she immersed herself in the buildings, historic artifacts, and landscape of this site. Her voice brings new consideration to the visual and haptic experience of this site, historically and today. 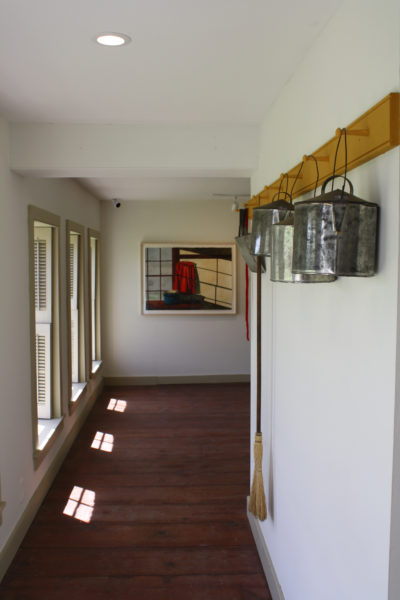 Each of ten large-scale watercolors, ranging in size from 28 x 40 inches to 40 x 60 inches, is imbued with light. The result is both pragmatic and sublime: the exquisitely beautiful works in the exhibition are an exploration of connecting to the universe in a larger and more meaningful way. 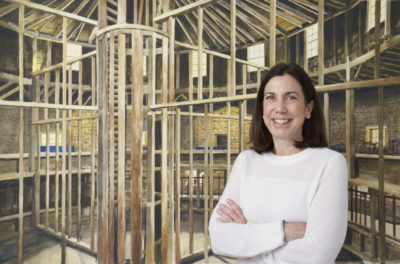 The artist with Wood Work

Barbara Ernst Prey is a distinguished artist with works in numerous public and private collections, including the National Gallery of Art, the White House (one of two living female artists represented in the collection), the Brooklyn Museum, the New York Historical Society, the Kennedy Space Center, and the Smithsonian American Art Museum. She was an illustrator for The New Yorker for ten years, and in 2003, her painting of the Diplomatic Reception Room was featured on the White House Christmas card. Her work has been commissioned by NASA four times and has toured internationally as part of the federal Art in Embassies Program. She was commissioned in 2015 by MASS MoCA to create an 8 x 15-foot painting — the largest known watercolor in the world — for Building 6, which opened in 2017.

Since 2008, Prey has served on the National Council on the Arts, the advisory board to the National Endowment for the Arts. She was appointed by the President for her contributions to the field of American art. Tapped annually for the US Art in Embassies program, Prey’s work has been on display in more than 100 US embassies and consulates worldwide, including those in Paris, Hong Kong, London, and Madrid. Her painting Gallantly Streaming is currently exhibited in the lobby of the US Mission to the United Nations.

Prey earned a bachelor’s degree from Williams College, where she is an adjunct faculty member, and a master of divinity degree from Harvard University. She maintains studios in New York, Maine, and Massachusetts.